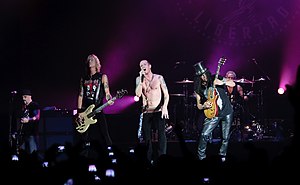 The forthcoming album from Velvet Revolver and former GnR guitar player Slash’s solo project is just around the corner, but you can get it first (a whole month before it’s scheduled UK release date!) by pre-ordering the special edition of Classic Rock Presents Slash. The album comes with 2 additional bonus tracks and the magazine itself is dedictaed to the life of the great man. In case you’ve been hiding under a rock somewhere you might not have heard that during the current Velvet Revolver dry-patch, the VR lads have been keeping busy. Duff has been on tour with his side project Duff McKagan’s Loaded, Matt has been drumming with Motorhead and Slash has been working on a solo project involving laying down tracks with numerous singers ranging from appetising collaborations with the likes of Iggy Pop, Dave Grohl (Foo Fighters and Them Crooked Vultures), Ozzy Osbourne, Alice Cooper, Lemmy Kilminster (Motorhead) and Myles Kennedy (Alter Bridge and now Slash’s frontman for the forthcoming Slash tour) to the rather head-scratching collaborations with Fergie and Cypress Hill (having said that here’s a vid of Fergie and Slash playing Sweet Child O’ Mine together. The guys filming this (or the folks standing close by) got rather excited by this collaboration 🙂 ).

26 March2010
We’re sorry but all pre-order copies of this Classic Rock Special have now SOLD OUT. Click here for more details: