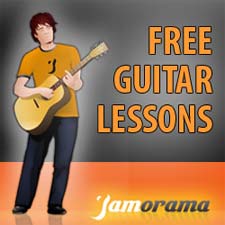 Here you can learn to play chords. The following essential guitar chords are the most widely used chords in guitar playing and you should focus your early efforts building up strength in your fingers playing these chords. If you have not yet read and understood the Tab section, please head over there now and come back to the first chords section later.

So, there are 8 chords that should be part of any guitarist’s arsenal. They are A, Am, E, Em, D, Dm, G and C chords. Collectively, these chords are known as the “CAGED” system. With these chords you can play any number of songs and the chords themselves are shown in the tabs below (see also Power Chords):

The following 2 chords, namely A major (or simply the A chord) and A minor (Am) are part of the CAGED chords system. With the A chord, note that string 6 should not be plucked. When missing out strings during a chord, you can either practice striking the strings 1-5 exactly (missing out 6 altogether), or you can mute string 6 by either hooking the thumb of your fretting hand slightly over the top of the fretboard (there are classical guitarists spinning in their graves as I say this).

The G chord is one of those chords you can often find alternative finger positions, especially in instructional books and videos. The fingering shown is the most commonly encountered form but as you become accustomed to including your 4th finger or pinky in your playing, you may find yourself replacing finger 3 on the 1st string with your 4th finger; finger 2 on the 6th string, with finger 3 and finger 1 on the 5th string with finger 2. Some people finf that this allows an easier switch between G and C chords, a fairly common and pleasant sounding chord progression. I suggest you try it and see what works for you.

The E chords are probably the easiest to play because you are playing all 6 strings and, in the case of the E minor chord (Em) you only have to fret with 2 fingers as shown in the bottom picture.

The D chords only require you to play 4 of the 6 strings (strings 1-4 (the thinnest string being “string 1”)). This makes playing the D chords (D and Dm chords) particularly challenging as you will have to build up accuracy in your strumming technique to avoid accidentally plucking the 5th and 6th strings (the fattest ones).

Once you have got to grips with the finger positions, then you should try switching back and forth between chords. For example, start with the A chord and try switching to the D chord simply sliding finger #3 to the third fret on the same string and moving finger #2 from the 3rd string to the first string at the second fret and finger #1 from the fourth string to the 3rd string, also at the second fret. Switching between chords fluidly is best achieved with what is know as “economy of movement” where you only move fingers you have to. One of the hardest chord transitions to get to grips with is the G to C chord transition as this requires the largest finger positional switch. There are ways around this involving using non-standard fingering of the G chord to make the switch to C easier but I advise you to keep to the standard finger positions shown above for now. Once you get used to the G to C chord switch you’ll wonder what all the fuss was about. It sounds great too. Try playing (using a metronome) 4 beats of G chord and keeping the timing, play 4 beats of the C chord, then back to G for 4 beats then to C again for another 4 beats and so on. Switching back and fourth continually while trying to keep to time is the most efective way I’ve found to develop the necessary “muscle memory” for switching between chords. I will add a tab of the most common of the CAGED chord switches soon.