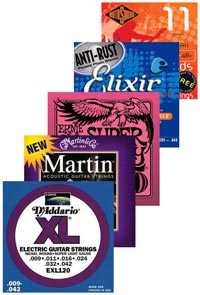 One of the reasons lots of people give up learning to play guitar within the first weeks or months is that, in the early days at least, it actually hurts – specifically the fingertips of the fretting hand. These fingers have to apply pressure to the guitar strings in order for the notes played to ring out clearly. Maybe you’ve heard that stiletto heals cause more damage to wooden floors than flat heeled shoes. The reason? The weight placed on the floor is the same with both shoe types (if the same person is wearing them of course)… but with stilettos, the weight is focused within a much smaller area. The concept is the same with guitar strings: Guitar strings are pretty thin and the pressure of the strings on the fingertips is intense along the thin region where the skin and the string connect. The result of this is the pain that causes some people people to simply give up before they have nailed Stairway. People may also shift their painful fingertips to reduce the pain, so that it is the soft, fleshy part of the fingers that apply pressure to the guitar strings. This poor technique will impact the sound the guitar string makes when played because the guitar string will be muted as it sinks into the soft finger pads and the angle of the fingers will be lower which may get in the way of the other strings when playing chords. This bad habit often creeps in early and will severely limit your guitar playing in the future. To be avoided!

Seasoned guitarists know that the fingertips will toughen up with time but there is an element of pain that you have to get through on the way to that. There are things you can do to help your fingers toughen up with less pain – here are some tips:

1) Keep the fingernails of your fretting hand short and tidy so that you can be sure that you are using your fingertips rather than the fleshy pad of you fingrs to fret your guitar strings. Along with a guitar tuner, a string winder, spare strings and wire clippers, no guitar gig bag is complete without a set of nail clippers.
2) String types – nylon strings are far easier on the fingertips than steel strings. If you have a classical guitar with nylon strings, you may want to use that to learn guitar, at least in the beginning.
3) The action of your guitar can also cause problems here – if the action (the distance between the open guitar string and the fretting surface) is too high, more pressure will be required by the fingertips of the fretting hand and thus will result in more pain – action can be raised or lowered in most guitars although this may not be good for the newbies as it can require some technical know-how – maybe a trip to the tech guys at your local guitar shop would be best. Electric guitars generally have a lower action than acoustic guitars, making them easier on the fingerips. Starting to learn with an electric guitar (and picking up an acoustic guitar after a while) may help.
4) Use lower gauge strings. Guitar strings come in different thicknesses or gauges. For example, I use Rotosound Roto Red strings (on my electric guitar) which are medium gauge strings (11-48). The thinner the strings, the less pressure that will have to be applied to fret, which means less pain. If you want to go for a louder heavier sound, you will need to use thicker strings but you should consider starting with thin to medium gauge and moving up to to heavy gauge strings gradually over time.

5) Use a capo at the first fret – I can’t remember where I found this great tip to give them credit but you can use a capo (a device that can be placed at different positions along the neck of your guitar to form an artificial nut – so that open strings play at a higher pitch than they would normally) this will lower the action of the strings along the length of the guitar making fretting that little bit easier.
6) Chemical methods – CAUTION – I have never used or recommended that people use chemical means to harden the skin of their fingertips, but some people have used things such as surgical spirits or even vinegar (acetic acid) successfully. My advice is build up your callouses naturally. I have even heard reports of people using sticking plasters over their fingertips but this will slow down the toughening up of the fingertips and should be avoided.

That’s about it for now. Grit your teeth and get through the painful bit – it won’t last long. And before you know it, you’ll be strumming away for hours, wondering what all the fuss was about.