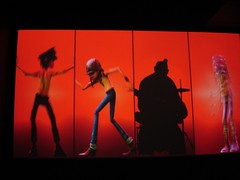 Following on from the news that U2 have pulled out of Glasto, (not to mention a significant chunk of their US dates on their 360o tour)… they will be replaced by virtual band the Gorillaz featuring Blur frontman Damon Albarn.

) in March and it features guest performances by the likes of Lou Reed, Bobby Womack and Snoop Dogg although no word yet if the Gorillaz will be “joined” on stage by any guests.

Are you going to Glastonbury Festival 2010? What do you think of this development? C’mon, don’t be shy.

Thanks to BBC News.