To celebrate ther impending release of the new Iron Maiden album “The Final Frontier” which is out on August 16 2010 in the UK and most other countries (August 17 2010 in US) , you can download the track El Dorado for free from IronMaiden.com.  If you’re in the US, use this Iron Maiden link instead.  You’ll also get some bonus artwork. It seems that Eddie has had an overhaul: 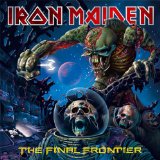 The new album is available to pre-order on CD

. US fans, The Final Frontier is also available from Amazon.com

Thanks to Rock Radio for this.