… and there may be more to come! So if you’ve got several g’s to burn on one of these beauties then that’s great (and I hate you ;)). Read on and try not to dribble… 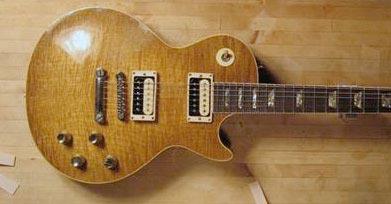 More details to come from Gibson on this one but the Slash 2010 Appetite for Destruction Les Paul is getting a limited numbers release so if you snooze you lose. This Les Paul guitar has been designed in collaboration with Slash to recreate the unique sound of Slash’s guitar in the Appetite for Destruction era of Guns ‘N Roses. This beast is fitted with Seymour Duncan Signature Series Alnico II Pro Slash humbucking pickups and has a 1960’s style LP neck. Additional features (from Slash 2010 Appetite LP article on Gibson.com):

This gorgeous looking red (sorry – “cabernet”) Les Paul from Sammy Hagar (frontman and guitarist with Van Halen and Chickenfoot) sports Gibson “zebra coil” humbucking pickups—neck pickup is ’57 Classic and bridge pickup is the BurstBucker 3 – great for both clean blues playing and growling rock guitar. Body is maple top/mahogany (weight-relief), neck is rosewood with 22 frets and the heastock sports the Chickenfoot logo (looks a bit like a square CND logo).
Available soon from Thomann.de:

When Randy Scruggs first opened the case that contained his Gibson signature acoustic, he says he felt like it was Christmas Day. You’ll probably feel that way, too, when you first lay eyes on this gorgeous guitar, modeled after Scruggs’ own beloved Advanced Jumbo.

The ever-popular ES-335 model has had, yet more significant changes made to improve upon one of the finest semi-hollow body electric guitars available. This model features a pair of Gibson ’57 classic pickups, laminated maple body/top and a mahogany neck with 22 fret rosewood fingerboard. This guitar will be available in the following colours: Antique Faded Cherry, Antique Vintage Sunburst and Antique Natural.

This guitar (which I would love to own in case anyone well off, who has got started on guitar with the help of Guitar Savvy and would like to show their appreciation – hohum) is probably one of the most collectable guitars around.

The last model from the first run of Les Pauls that debuted in the late ’50s, the 1960 Les Paul Standard model has become one of the most collectible guitars of all time, not only because of its rarity but because, in its third year of production, Gibson engineers had hammered out the best yet version of the Les Paul. This incredible guitar has now been reincarnated in the Custom Shop 50th Anniversary 1960 Les Paul Standard, which is available in three limited edition models, each with a different evolution of neck width from the 1960 run.

You can check out some of the 50th anniversary Les Pauls at Thomann.de in the following colours:

Read the full story on Gibson.com with links to full details for these guitars here.