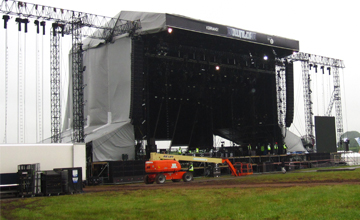 So some of you will be there already and I hope you’re as excited as I am to see the stages in all their glory. Rock Radio will be running the official Download Radio station on 87.7FM or listen on Rock Radio.

Anyway, Bullet for My Valentine are from Bridgend in Wales (UK) and have been around since 1998. Singer and rhythm guitarists is Matt Tuck and lead guitarist is Michael Paget, (both frequent visitors in the pages of Total Guitar Magazine). Jason James (bass guitar, backing vocals), and Michael Thomas (drums) complete this metal band lineup.

BFMV are playing the Ronnie James Dio stage TOMORROW NIGHT(!!!) (Friday) at 6:55pm. Here’s the band playing the 2009 Big Day Out Festival in Sydney, Australia. Matt has a bit of a potty mouth so if you’re offended don’t watch.

So the final band we’re going to feature in the run up to Download 2010 is one that needs no introduction. AC/DC are Aussie hard rockers featuring two of Glasgow’s favourite sons, the Young brothers (Malcolm and Angus – who moved to Australia from Cranhill in Glasgow when they were, er, young). AC/DC are headlining the Maurice Jones Stage tomorrow night 29 years on from the legendary Monsters of Rock Festival appearance at Castle Donington in 1981 during the time of Back in Black, the band’s bestselling album and the first to feature Brian Johnson. Johnson replaced Bon Scott who died in February 1980.

So that’s about it. Download Festival 2010 is here. The stages are built, the tents are pitched and already contain some drunken metalheads, the bands are arriving (hopefully they all have their equipment – Slayer once had to reshuffle their appearance afer their gear failed to materialise until after their scheduled show time – Damageplan (Dimebag Darrell Abbott’s band) stepped in and saved the day) and the Rock Radio Download station (Download FM) is on air now!