Trivia: Probably one of the most famous guitar teachers around… taught at a San Francisco music store for 10 years where he instructed the likes of Kirk Hammett, Steve Vai and David Bryson (Counting Crows). 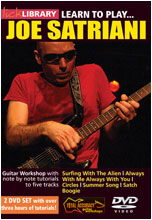